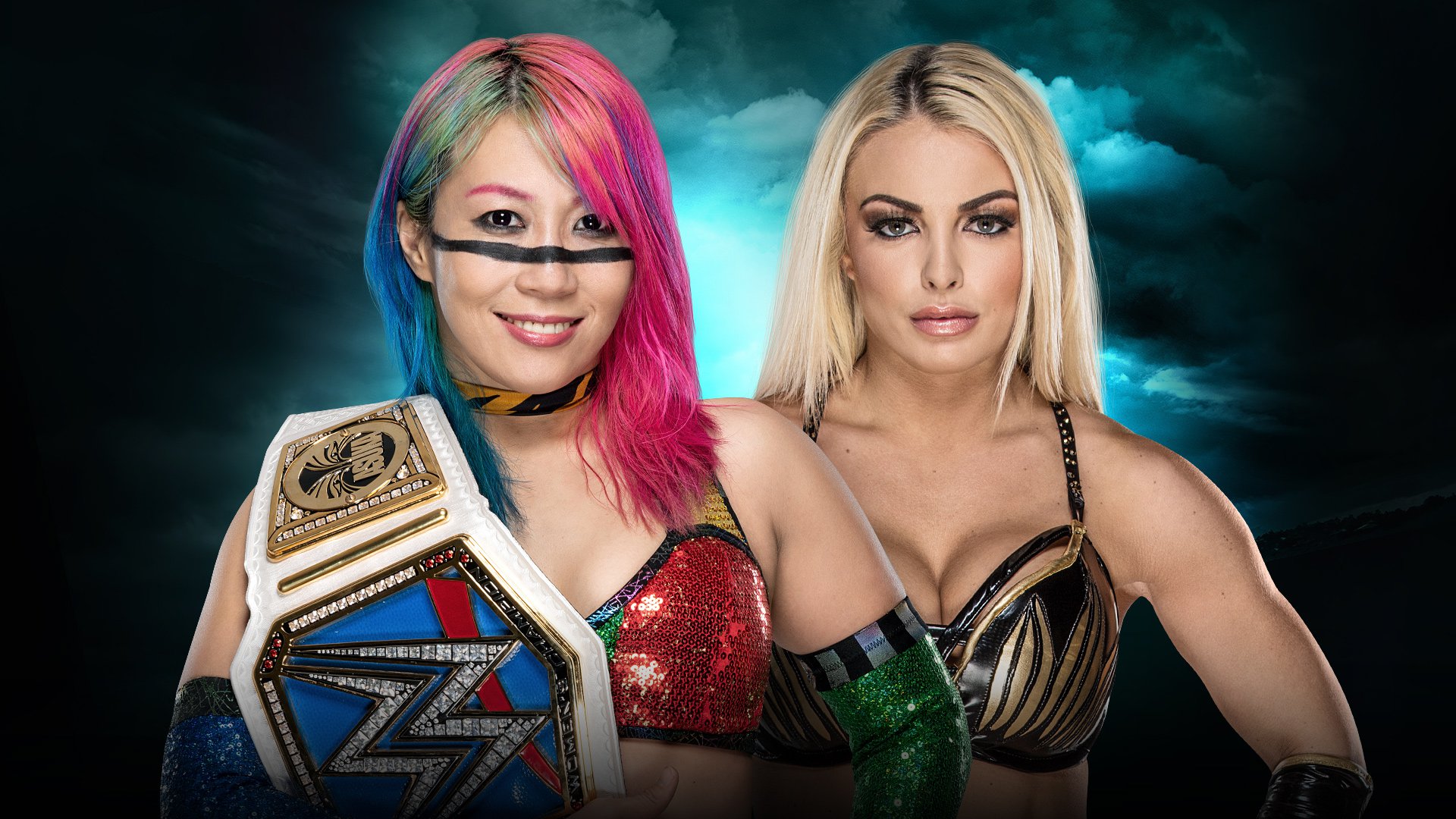 SmackDown Women’s Champion Asuka comes out to the ring for an interview. She says she doesn’t want to talk about Becky and Charlotte anymore, she wants to know who is ready for Asuka right now. Mandy Rose and Sonya Deville come out to interrupt. Mandy tells Asuka to take some advice from her, because she’s the most-talked about superstar in WWE. She hits the ring and we have a match.

Asuka vs. Mandy Rose
This one is a non-title match. The opening bell sounds and Asuka connects with a leg kick and then a dropkick. Lacey Evans comes out to interrupt very early in the match. Lacey walks down the ramp and she turns around and heads backstage. Mandy takes advantage of the distraction and rolls up Asuka from behind for a two count. Mandy follows up with some strikes, then she takes Asuka into the corner. Asuka dumps Mandy outside, but back in the ring Mandy turns things around with a gut-wrench suplex. Asuka looks for a knee bar, but Mandy rolls outside. Asuka follows her out, and Mandy hits her with a knee to the face. Back in the ring, Mandy stomps on Asuka then wastes some time talking trash. Asuka comes back with shots to the face and then a missile dropkick off the middle rope. Asuka follows up with a spinning heel kick for a two count. Asuka hits a German suplex and a Shining Wizard for another two count. Asuka hits a knee to the face and Mandy starts selling that Asuka poked her eye. The ref pulls off Asuka, and Mandy pulls Asuka neck-first into the middle rope. Mandy rolls up Asuka for the three count.

Mandy and Sonya celebrate on the ramp, and Asuka looks shocked.

The Golden Goddess isn’t surprised that she defeated Asuka on SmackDown LIVE. In fact, she wonders why everyone else has a hard time figuring out The Empress of Tomorrow.

Women’s Elimination Chamber match
The winners of this match will be the first-ever WWE Women’s Tag Team Champions. Bayley and Sasha start off against Mandy Rose and Sonya Deville. Bayley and Sasha start off strong with dropkicks and running knee strikes to the face in tandem, and then neckbreakers on Mandy and Sonya. Sonya looks for a shot in the corner, but Sonya reverses into a slam and pin for a two count. Mandy and Sonya miss kicks up against the cage wall and Sonya and Bayley drop them. The countdown starts, and Sarah Logan and Liv Morgan enter next. They immediately beat down Bayley and Sasha, then they fight with Mandy and Sonya. This leads to a big pyramid super-plex in the corner, and everyone is down. The IIconics enter next and beat on the women who are all already down. The IIconics start working over Sasha’s shoulder now and pin her for a two count. The Iiconics try to choke Sasha and Bayley up against the cage, then Peyton Royce somersaults over the top rope and kicks Bayley in the face. The countdown starts, and Carmella and Naomi are in next. Carmella and Naomi clean house and hit bronco busters on all their opponents in opposite corners. There’s a flurry of offense as everyone starts getting to their feet. Peyton hits a neckbreaker on Sasha, then Liv hits a facebuster on Peyton. Many Rose suplexes Liv, then Sarah hits a Fisherman’s suplex on Mandy. Sonya spears Sarah down, then Carmella superkicks her. Naomi and Mandy go at it now, and Naomi hits the running hip attack on her. The IIconics double team Naomi and they both pin her at the same time for the three count. Naomi and Carmella are now eliminated.

The other teams surround the IIconics now, but then the countdown starts and Nia Jax and Tamina enter. Nia and Tamina clean house and drop everyone in their sight. Tamina and Nia pin The IIconics first, and The Iiconics are now eliminated. Liv Morgan and Sarah Logan starts fighting back against Nia and Tamina and they drop them both. They double team Tamina and pin, but Nia breaks it up. Sonya Deville and Mandy Rose double team Nia now for a two count. Banks hits a running knee on Tamina in the corner, then her and Sasha double team Morgan and Logan. The Riott Squad climbs to the top of one of the pods now to avoid the chaos below as everyone goes at it. Banks and Bayley double team Morgan and Logan, then Nia drops them. Liv comes flying off the top with a splash on Nia on the cage floor. Nia and Tamina fight back and drop both Riott Squad members, then Tamina hits the splash off the top on both of them for the three count. The Riott Squad is now eliminated.

Nia charges at Bayley against a pod, but Bayley moves and Nia crashes in to the pod by herself. Bayley and Sasha now double team Tamina and pin her for the three count. Nia and Tamina are now eliminated. It’s down to Sasha and Bayley, against Mandy and Sonya. They all start brawling in the middle of the ring now. Banks and Bayley are able to double team Sonya and pin, but Mandy breaks it up. Mandy and Bayley start climbing the cage now to the top of a pod, and Sasha follows. Sonya climbs up now too, but Bayley kicks her down. Bayley hops down, and Sonya spears her into the pod. Mandy and Sasha come down from the pod next, and Mandy suplexes Sasha for a two count. Mandy and Sonya try to double team Sasha, but Sasha reverses it and drops them both. Sasha goes for the Banks Statement on Sonya and locks it in. Sonya taps out, and now Bayley and Sasha are the first women’s Tag Team Champions.

After the match, Bayley and Sasha do an in-ring interview where they cry while the crowd chants “you deserve it.” Sasha says there’s here to stay, and they’re going to change things forever.

Naomi & Carmella vs. Mandy Rose & Sonya Deville vs. The IIconics
The losers of this match will be the first two teams in the Women’s Elimination Chamber. Naomi and Carmella control the opening moments of this one, and Naomi hits a big dive on Mandy at ringside. Back in the ring, Sonya works over Naomi and Carmella. The IIconics seem to be trying to avoid getting in the action in this one. Naomi hits up hitting the split legged moonsault on Mandy Rose for the three count after a short match.

After losing a Triple Threat Match that forces them to start the WWE Women’s Tag Team Championship Elimination Chamber Match, Mandy Rose & Sonya Deville believe they won’t be at a disadvantage this Sunday.

Sonya Deville and Mandy Rose cut a promo at the gorilla position saying that Naomi and Carmella are too inexperienced of a team, and The IIconics are a comedy act. Mandy brings up the Elimination Chamber, and points out that Naomi hasn’t pinned her before.

Carmella & Naomi vs. The IIconics vs. Mandy Rose & Sonya Deville
Mandy avoids Naomi in the opening moments and tags in Billie to escape. Carmella tags in for a double team on Billie, then Mandy tags in and she puts the boots to Carmella. Naomi and Sonya tag in, and Mandy runs away from Naomi. Naomi hits some kicks on Sonya, then Peyton tags in. Naomi takes out both IIconics, then Naomi pulls Mandy in the ring and pummels on her. Peyton comes in and Naomi drops her, but the distraction leads to Mandy hitting a butterfly suplex on Naomi for the three count.

After their Triple Threat Match win, Rose & Deville say that their friendship will lead to victory in the Elimination Chamber Match to crown the first-ever WWE Women’s Tag Team Champions.