Tonight’s WWE SmackDown on FOX opens up with Mandy Rose getting ready in the back. Otis walks up and asks what he can do to help. Mandy has been ready for this match and she’s ready. She tells Otis to focus on Money In the Bank and she will take care of Sonya Deville. Rose and Otis kiss before she walks off. The camera cuts backstage to Deville warming up. Dolph Ziggler walks up and she talks about how she’s been ready. Ziggler says he will be waiting here for her. He asks her to take it easy on Rose’s face for him. She can’t make any promises. Deville walks off.

We go to the ring for tonight’s opener as Mandy Rose makes her way out. Michael Cole welcomes us to SmackDown. He’s joined by Corey Graves. They go over the Rose vs. Sonya Deville feud. Deville is out next as Greg Hamilton does the introductions.

The bell rings and they go at it. Rose unloads and beats Deville down in the corner. The referee tries to get her to back off. Rose keeps the offense going but has some trouble with her knee. Deville takes advantage but Rose drops her and keeps the offense coming. Deville retreats to the floor for a breather. Rose yells at her to come back in. Deville comes back to the apron and Rose runs into a kick. Deville comes back into the ring with a knee. Deville with a running knee for a close 2 count. Deville talks some trash and keeps Rose down, taunting her.

Deville manhandles Rose some, slamming her back to the mat for a bodyscissors while talking trash to her face. Deville looks to rip Rose’s lashes off. Deville keeps the trash talking and shots coming while on the mat. Deville goes on about how she’s going to hurt her former friend and partner. Deville with another kick. Deville runs the ropes but Rose clotheslines her, and again. Rose with a running knee to knock Deville out to the floor. Rose follows and slams Deville’s face into the announce table, calling her a b—h. Rose slams Deville face-first into the steel steps as the referee counts. Rose launches Deville into the steps.

Rose launches Deville over the announce table as Grave and Cole quickly move out of the way. Rose keeps talking trash as she brings Deville back into the ring. Rose yells at Deville to get back up and fight. Rose goes for the double underhook but it’s blocked. Deville blocks a knee and rolls Rose up for the pin out of nowhere.

After the match, Rose is shocked as the music hits. Deville quickly retreats to the stage and starts laughing as Rose looks on from the ring. They stare each other down. 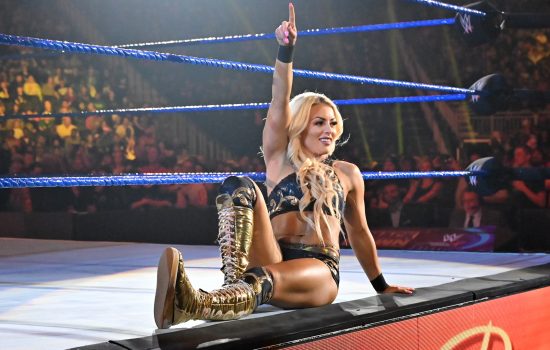