A group of female Superstars rush the ring but Truth helps Carmella escape with the WWE 24/7 Title. Banks and Bayley corner Flair but she strikes first. They double team her until the music interrupts and out comes RAW Women’s Champion Becky Lynch. Becky avoids a double team attack and unloads on Banks and Bayley, going back and forth on each. She applies the Disarm Her on Banks but Bayley pulls her partner to safety. Lynch stands tall in the ring and taunts Banks and Bayley as her music starts back up.

Mandy Rose and Sonya Deville are backstage. Rose is passing out Maxim Australia magazines, with her on the cover. Deville asks if she’s serious because they have a match coming up. Otis of Heavy Machinery interrupts and wants a selfie with Rose.

Asuka and Kairi Sane vs. Mandy Rose and Sonya Deville

We go to the ring and out comes The Kabuki Warriors, Asuka and Kairi Sane. Back to commercial.

Back from the break and Sane and Asuka wait in the ring. Fire and Desire are out next, Mandy Rose and Sonya Deville. Rose is carrying her issue of Maxim Australia magazine. Asuka starts off with Deville and they go at it. Deville backs off on the ropes and Asuka nails her. Deville comes back and slams Asuka to the mat. Deville with a kick. Asuka catches a kick and delivers strikes of her own. Deville with a shoulder but Asuka drops Deville with a shoulder of her own. Sane tags in for double teaming to Deville. Sane covers for a 2 count.

Sane goes at it with Deville. Deville drops her with a big right hand. Deville tosses Sane out of the ring and tags in Rose. Rose raises her magazine cover in the air and rubs it in Sane’s face, saying she will never looks like this. Sane fights back and kicks the magazine out of her hands. Sane unloads on Rose with strikes at ringside.

Sane brings it back into the ring, taking Rose down with a head scissors. Sane with the sliding punch into the corner. Deville runs in for interference. The referee is distracted with Asuka, allowing Deville to drop Sane. Rose with shots to Sane for a 2 count. Rose unloads on Sane in the corner now. Sane fights out of the corner and rocks both opponents. Rose stops Sane from tagging. Sane kicks Rose off and makes the tag. Asuka comes in and unloads on Rose. Asuka with a corner Hip Attack and a running bulldog out of the corner. Asuka with the running kick to the face but Deville breaks it up at 2. Sane runs in and takes Deville down. Rose rolls Asuka for a 2 count. Sane tags in as Asuka drops Rose with a Codebreaker. Sane goes to the top and follows up with the InSane Elbow. Sane covers Rose for the pin to win.

After the match, Asuka and Sane stand tall as their music hits. Deville checks on Rose. 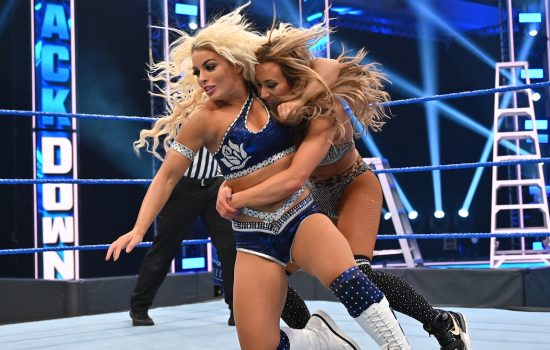